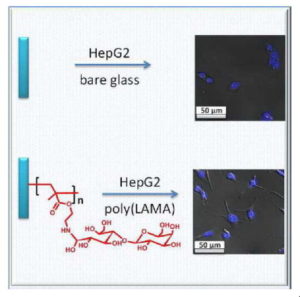 This work demonstrates the application of carbohydrate based methacrylate polymer brush, poly(2-lactobionamidoethyl methacrylate), for the purpose of cell adhesion studies. The first part of the work illustrates the effects of the structure of the aminosilane based ATRP initiator layer on the polymerization kinetics of 2-lactobionamidoethyl methacrylate) (LAMA) monomer on thermally oxidized silicon wafer. Both monolayer and multilayered aminosilane precursor layers have been prepared followed by reaction with 2-bromoisobutyrylbromide to form the ATRP initiator layer. It is inferred from the kinetic studies that the rate of termination is low on a multilayered initiator layer compared to a disordered monolayer structure. However both initiator types results in similar graft densities. Furthermore, it is shown that thick comb-like poly(LAMA) brushes can be constructed by initiating a second ATRP process on a previously formed poly(LAMA) brushes. The morphology of human hepatocellular carcinoma cancer cells (HepG2) on the comb-like poly(LAMA) brush layer has been studied. The fluorescent images of the HepG2 cells on the glycopolymer brush surface display distinct protrusions that extend outside of the cell periphery. On the other hand the cells on bare glass substrate display spheroid morphology. Further analysis using ToF-SIMS imaging shows that the HepG2 cells on glycopolymer surfaces is enriched with protein fragment along the cell periphery which is absent in the case of cells on bare glass substrate. It is suggested that the interaction of the galactose units of the polymer brush with the asialoglycoprotein receptor (ASGPR) of HepG2 cells has resulted in the protein enrichment along the cell periphery.