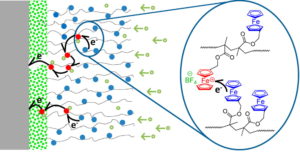 A versatile method based on electrografting of aryldiazonium salts was used to introduce covalently attached initiators for atom transfer radical polymerization (ATRP) on glassy carbon surfaces. Polymer brushes of ferrocenylmethyl methacrylate were prepared from the surface-attached initiators, and these films were thoroughly analyzed using various techniques, including X-ray photoelectron spectroscopy (XPS), infrared reflection–absorption spectroscopy (IRRAS), ellipsometry, and electrochemistry. Of particular interest was the electrochemical characterization of the electron transfer through the diazonium-based initiator layer to the redox centers in the polymer brush films. It was found that the apparent rate constant of electron transfer decreases exponentially with the dry-state thickness of this layer. To investigate the electron transfer in the brushes themselves, scanning electrochemical microscopy (SECM) was applied, thereby allowing the effect from the initiator layer to be excluded. The unusual transition feature of the approach curves recorded suggests that an initial fast charge transfer to the outermost-situated ferrocenyl groups is followed by a slower electron transport involving the neighboring redox units.