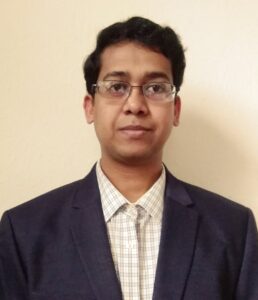 Sunirmal received his M.Sc. degree in Chemistry (2009) in India. He started his research career in the field of polymer science at IISER-K in India and he obtained PhD degree in 2013. He have joined as a postdoctoral research associate (2013-2017) at University of Florida, USA in the field of polymer chemistry. In 2017, he joined in Organic Surface Chemistry Group, Aarhus University as postdoc fellow. During his postdoc, he have developed a new class of self-immolative polymer which could be applicable in bio-medical sciences.

Xinming received his bachelor (2004-2008) and master education (2008-2011) in China. He started his PhD education at University of Copenhagen working on the field of porous materials in 2011 and obtained the PhD degree in 2014. His expertise involves the design and synthesis of functional building blocks, preparation of porous carbons and polymers, and gas adsorption. In 2015 he joined the Organic Surface Chemistry group as a postdoctoral fellow. His current focus is to prepare porous and/or surface-attached materials with catalytic activity for CO2 electroreduction.

Lizhi Huang received his bachelor (2003-2007) and master education (2007-2009) in China. During his master, he started his research career with photo-degradation of environmental pollutants using iron-bearing photocatalyst. After that, he started his PhD (2009-2013) at University of Copenhagen working on the field of synthesis and application of 2D materials for decontamination with a focus on photocatalysis and electrocatalysis. During his post-doc (2013-2015) at University of Copenhagen, his research topic is electrocatalytic decontamination using 2D iron-based catalyst.   In 2015 he joined the Organic Surface Chemistry group as a postdoc. His current focus is synthesis of multifunctional electrocatalyst for both environment and energy applications.

Kyoko joined the Organic Surface Chemistry group in 2011, after obtaining PhD degree in Material Science at University of Surrey (UK). Her field of expertise is surface analysis using X-ray photoelectron spectroscopy (XPS) and time-of-flight secondary ion mass spectrometry (ToF-SIMS). Her focus is applying a primer on metal surface via combination of electrografting and surface initiated polymerisation techniques in order to improve adhesion between polymer and metal. She is now employed by SP Group A/S and continue working with the group. 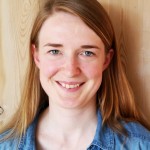 Mie started to study Chemistry at Aarhus University in 2006. In 2009 she obtained her Bachelor’s degree after studying the growth of polymer brushes from electrode surfaces. This work was continued when she was enrolled as a PhD-student under the supervision of Prof. Kim Daasbjerg. During her PhD studies Mie has developed new types of functional polymer brushes which e.g. can be applied for novel electrocatalysis systems. She has also worked on combining polymer brushes and graphene. As a postdoc, Mie will work on the development of biocompatible polymer brushes for percutaneous devices and implants. 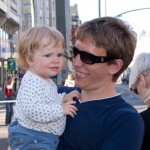 Mikkel started his studies in Nanoscience in 2005 at Aarhus University. He started in the Organic Surface Chemistry group in 2008 finishing his bachelor project within fundamental surface chemistry. Mikkel has since worked on his PhD in the Organic Surface Chemistry group. He obtained the PhD degree in 2014 for his work on “Production and Modification of Graphene and Similar Carbonaceous Materials”. Mikkel is currently continuing his studies within the field of graphene as a Post Doc in the group. Mikkel has left the group to a carrier as entrepreneur, and are working on two new companies in widely different areas, namely 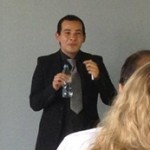 Zakaria was born in 1987 in Gleizé (France). With is bachelor in general physico-chemistry from Claude Bernard University (Lyon, France 2005-2008) he started his research career as a master internship in the polymer chemistry group of Polytech Lyon (under the guidance of Gerard Seytre, Emanuel Beyou and Isabelle Royaud). He worked during one year on preparation of composites (Polystyrene@Nickel particles) for giant permittivity materials. This introduction to the research world assured him that he wanted to continue in the broad and rich field of surface and polymer chemistry. The next step in his journey was obviously the PhD, he got a PhD (2010-2013) in the group of Mohamed Mhedi Chehimi where he worked for three years on thin film preparation and characterisation (mainly XPS) on different flat substrates: gold, ITO, PVC, PET, etc. It was an epiphany, he knew that he would use as much as possible XPS in his future career. The occasion was given in the fall of 2013 where he got a temporary assistant professor position under the guidance of Benjamin Carbonnier, his work was of course surface modification and XPS analysis but this time on porous polymer used in HPLC column.  Finally he got a post doc position (beginning of 2015) in the group of Kim Daasbjerg and Steen Uttrup Pedersen where his work is focused on preparation (using Chemical Vapor Deposition) and electrochemical delamination of graphene monolayers. 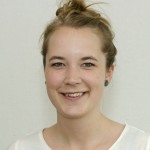 Line was born in 1988 in Aarhus, where her chemical education began in 2008 at Aarhus University. She received her Bachelor’s degree in Medicinal Chemistry in August 2011, where she was studying the possibility to use Reversible Addition-Fragmentation Chain Transfer Polymerization to grow polymer brushes from metal surfaces. She spend the first semester of her master studies at University of Florida. After returning to the group in January 2012 she did a chemical project. She visited the Institute of Electronic Materials Technology in Warsaw from February 2013 to April 2013, where she under the supervision of Dr. Wlodzimierz Strupinski learned the techniques of graphene transfer. In May 2013 she started as a PhD student at Aarhus University under the supervision of Professor Kim Daasbjerg and Associate Professor Steen Uttrup Pedersen, where she also received her Master’s degree in Chemistry from in June 2014. The primary work in her PhD research revolves around modification of graphene using electrochemistry. In the spring of 2014, she spent 2 months studying at the Institute of Molecular Sciences in Bordeaux under the supervision of Associate Professor Dodzi Zigah. 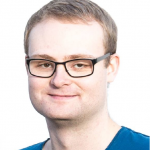 Stefan was born in 1990 and grew up in the area of Aalborg, Denmark. In 2010 he began to study Medicinal Chemistry at Aarhus University. In 2013 he obtained his Bachelor’s degree in Medicinal Chemistry, after doing work in organic surface chemistry. His Master’s project began in august 2014. Throughout his studies in the group, he has been working with developing heterogeneous reactions, which can be used in “building onto” and functionalizing surface structures. His experience in organic synthesis from his studies in Medicinal Chemistry, have been of great use in his entire work. After finishing his Master project he continued as an industrial Ph.d.-student in collaboration with Radisurf.

Bjarke received his bachelor degree in 2010 working on hydrothermal synthesis of ZrO2 nanoparticles. After a year away from academia, teaching public school and gymnasium, he initiated his master studies and became familiar with the Organic Surface Chemistry group. They were at that time starting to look into graphene and under their supervision he set up equipment for chemical vapour deposition with the aim of growing high quality graphene on metal substrates. He received his master degree in early 2013 and soon thereafter started working at Newtec Engineering in Odense, with whom he is now doing an industrial PhD. 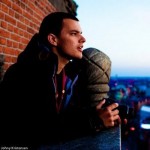 Emil obtained his bachelor degree in nanoscience from iNANO at Aarhus University in 2013, working with electrochemical carboxylation of graphene on nickel surfaces. He is now a PhD student in the group and is working with production of graphene dispersions by high-shear exfoliation, chemical modification of the produced graphene and embedding these in polymer materials in order to obtain improved properties. 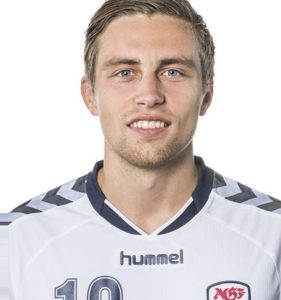 Andreas was born in 1992 and grew up in Skanderborg. In 2012, he began his education at Aarhus University and received his Bachelor’s degree as Engineer in Chemistry and Technology in 2015. Here, he was investigating polymer brush modification of titanium dioxide in order to produce a biocompatible interface that can be used for body implants. In the autumn of 2016, he will begin his Master’s project.

Jakob was born in the little town Hinnerup just outside Aarhus. He obtained his bachelor in 2014 from iNano at Aarhus university, in the final project working with graphene CVD grown on palladium in the Organic Surface Chemistry Group. Jakob is now a part of Sino-Danish centers master degree in Nanoscience and, after having spent a year in China, is now doing his masters project, Again working with graphene. 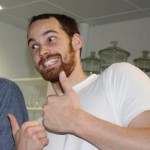 Bjorn was born and raised in Horsens where he finished high school, after which he moved to Aarhus to pursue an education in the noble field of chemistry. In 2013 he earned a bachelor’s degree in bioinorganic chemistry from the group of Henrik Birkedal for his work on self-healing hydrogels. Bjorn’s present engaged in his master thesis in collaboration with Grundfos to incorporate graphene into various polymer matrices to try and improve properties such as barrier, strength and conductivity. These properties are tuned by varying the content and alignment of the graphene sheets, and to what extent the graphene is functionalized, and in what way the graphene was produced. For future work he hopes to develop a ‘One-Pot’-reaction to functionalise and exfoliate graphite to functionalized graphene. 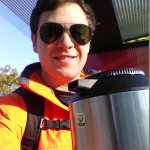 Kristian was born in Gedved, a small town between Horsens and Skanderborg, in 1989. His chemical education started with A-levels in chemistry and process technology at HTX (College), which in 2013 lead to a Bachelor’s degree in Chemistry and Technology at Aarhus University. His Bachelor focused on characterization and modification of nickel silver, as part of an industrial project, which is now being continued as a chemical project during his Master’s Degree in Chemistry, also at Aarhus University. 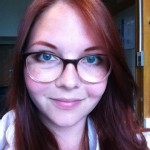 The life of Anja first unfolded in Assens, a village near the town of Mariager and the fjord known as Denmark’s most beautiful. In 2012 she obtained a Bachelor’s degree in Medicinal Chemistry, working under Dr. Brigitte Städler at the INANO department at Aarhus University. The project involved work with polymer thin films encapsulated with liposomal cargo carriers and the interaction of these nano structures with myoblasts. In 2014 she did a chemical project in the Organic Surface Chemistry group under Prof. Kim Daasbjerg. This project entailed a study of the growth of polymer brushes and a reach for brush diversity by reinitiation of brush structures to obtain co-polymers and by introduction of post-modifications brushes to tune the surface properties. Currently Anja is working on her Master thesis in the Organic Surface Chemistry group under Prof. Kim Daasbjerg, where she will attempt to transfer her work on polymer brushes to a QCM (quartz crystal microbalance) study in order to investigate polymer kinetics and the behaviour of growing polymer brushes in solution.