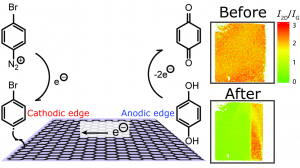 Development of versatile methods for graphene functionalization is necessary before use in applications such as composites or as catalyst support. In this study, bipolar electrochemistry is used as a wireless functionalization method to graft 4-bromobenzenediazonium on large (10 × 10 mm2) monolayer graphene sheets supported on SiO2. Using this technique, transferred graphene can be electrochemically functionalized without the need of a metal support or the deposition of physical contacts. X-ray photoelectron spectroscopy and Raman spectroscopy are used to map the chemical changes and modifications of graphene across the individual sheets. Interestingly, the defect density is similar between samples, independent of driving potential, whereas the grafting density is increased upon increasing the driving potential. It is observed that the 2D nature of the electrode influences the electrochemistry and stability of the electrode compared to conventional electrografting using a three-electrode setup. On one side, the graphene will be blocked by the attached organic film, but the conductivity is also altered upon functionalization, which makes the graphene electrode different from a normal metal electrode. Furthermore, it is shown that it is possible to simultaneously modify an array of many small graphene electrodes (1 × 1 mm2) on SiO2.