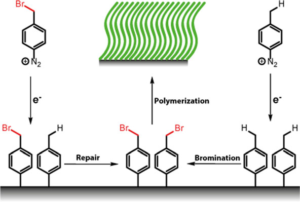 Electrografting of aryldiazonium compounds to conducting surfaces is extensively used to alter the surface properties. The highly reactive aryl radical is the actual grafting reagent, which on one hand is pertinent for the efficiency of the procedure but, on the other hand, in some cases is problematic by introducing unwanted side reactions. The electrografting of e.g. 4-(bromomethyl)benzenediazonium is often carried out with the aim of creating a film that may serve as initiator for a controlled atom transfer radical polymerization. Unfortunately, this is difficult to accomplish because of bromine abstraction reactions occurring during the grafting process, which diminish the bromine content of the grafted layer significantly. Yet, this problem may be resolved by enriching the initiator film with bromine through a Wohl-Ziegler bromination prior to the polymerization. An alternative pathway consisting of grafting 4-methylbenzenediazonium followed by a bromination reaction to introduce bromine atoms at the benzylic position is shown to work equally well. Additionally, bromination of grafted benzyl alcohol groups have been explored. Finally, the repaired bromine films are used as a platform for atom transfer radical polymerization.