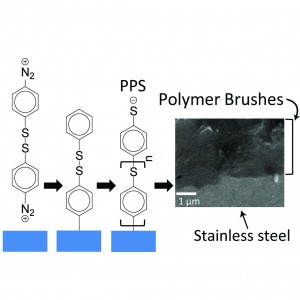 A simple electrochemical approach based on potential sweeping has been developed for growing poly(phenylene sulfide) (PPS) brushes from 4,4’-disulfanediyldibenzenediazonium salt on glassy carbon and stainless steel. First, the diazonium salt becomes reduced at the substrate on the initial part of the sweep carried out in a negative direction to form a covalently bonded diphenyl disulfide film. Once sufficiently extreme potentials are reached the disulfide bridges are reductively cleaved to form a thin layer of covalently attached thiophenolates. These are prone to be involved in fast coupling reactions with the diazonium salt to form PPS brushes in a repetitive growth process. In this manner linear PPS brushes with thicknesses up to 150 nm are easily formed. In addition, exact control on the brush length may be exerted through the switching potential selected or the number of sweeps applied. The films are characterized by time-of-flight secondary ion mass spectrometry which shows that the film growth is accompanied by an increase in the intensity ratio of S−/ inline image in line with the proposed PPS structure. This structure was further supported by Raman spectra, exhibiting a high-intensity C−S stretch band and no S−S stretch band.