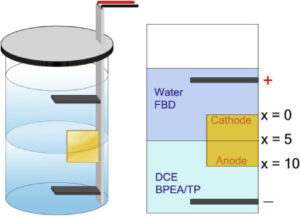 Bipolar electrochemistry is a wireless technique by which surface modifications at the extremities of a conducting object can be accomplished. In this study a new methodology for doing simultaneous electrografting of two different organic films at each end of a gold substrate is reported. A two-phase system consisting of an aqueous and an organic phase is developed to separate the two grafting agents that otherwise would react to form a non-grafting species. The surface modifications are achieved by the simultaneous electrografting of an aryldiazonium salt and a primary alkylamine, which are grafted by reduction and oxidation, respectively. The breadth and thicknesses of the grafted films depend on i.a. the electrical field in the solution, which easily is altered by changing the applied voltage between the feeder electrodes. To demonstrate that the system is not limited to electrografting, the oxidative electropolymerization of thiophene at the anodic end of the electrode was carried out as well. Finally, bipolar experiments using a diazonium salt and thiophene in the same phase were conducted.