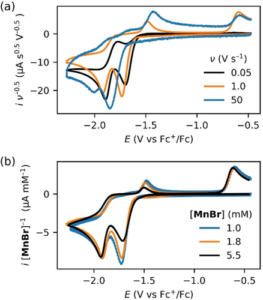 Development of new catalytic approaches for reduction of small molecules is an aspiring technology to alleviate increasing energy demands without use of fossil fuels. One of the most promising molecular catalysts for reduction of CO2 is fac-Mn(bpy)(CO)3Br (bpy=2,2’-bipyridine). In this work, the mechanism of electrochemical reduction of this complex is elucidated using cyclic voltammetry along with digital simulations. It is revealed that the dimer complex, Mn2(bpy)2(CO)6, is not, as often assumed, formed by dimerization of the singly reduced manganese complex, [Mn(bpy)(CO)3]., but instead from its reduction to [Mn(bpy)(CO)3]−, followed by further reaction with Mn(bpy)(CO)3Br (rate constant=1.75×105 M−1 s−1). On the basis of cyclic voltammetry, infrared-spectroelectrochemistry, and 1H NMR spectroscopy, we establish that this parent-child reaction involving Mn(bpy)(CO)3Br as electrophile can be diverted by adding either acids or iodomethane as substituting electrophiles. This demonstrates that [Mn(bpy)(CO)3]−, which is the central catalyst for CO2 reduction, can be formed at less extreme potentials than previously believed by suppressing the parent-child reaction.