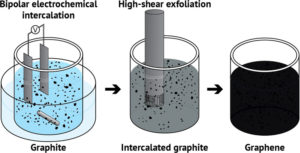 In this study, we demonstrate that bipolar electrochemistry is a viable strategy for “wireless” electrochemical intercalation of graphite flakes and further large-scale production of high-quality graphene suspensions. Expansion of the graphite layers leads to a dramatic 20-fold increase in the yield of high-shear exfoliation. Large graphite flakes, which do not produce graphene upon high shear if left untreated, are exfoliated in a yield of 16.0 ± 0.2%. Successful graphene production was confirmed by Raman spectroscopy and scanning transmission electron microscopy, showing that the graphene flakes are 0.4–1.5 μm in size with the majority of flakes consisting of 4–6 graphene layers. Moreover, a low intensity of the D peak relative to the G peak as expressed by the ID/IG ratio in Raman spectroscopy along with high-resolution transmission electron microscopy images reveals that the graphene sheets are essentially undamaged by the electrochemical intercalation. Some impurities reside on the graphene after the electrochemical treatment, presumably because of oxidative polymerization of the solvent, as suggested by electron energy loss spectroscopy and X-ray photoelectron spectroscopy. In general, the bipolar electrochemical exfoliation method provides a pathway for intercalation on a wider range of graphite substrates and enhances the efficiency of the exfoliation. This method could potentially be combined with simultaneous electrochemical functionalization to provide graphene specifically designed for a given composite on a larger scale.